Being a successful property manager isn’t easy. It takes time, dedication, patience and a lot of legwork, not just to gather leads, but to convert those prospects into actual paying customers. If you’ve been struggling lately to get people through the funnel, chances are you may be engaging in one of the following sales five tactics that are just, well, terrible. Let’s go through them one by one.

Of course you can’t completely personalize marketing material like postcards and flyers, but when it comes to the crux of your advertising – the web – personalization is absolutely critical. Your savvy prospects can and will be able to tell the difference between an email blast that went to hundreds of thousands of others and one that was strategically tailored to their needs. Which of these two emails do you think will get a response?

The Property Manager's Guide to Extraordinary Marketing has all the inspiration and resources you need to make the right message heard by the right people.

You’re not the only property manager service in town, so don’t risk losing your prospects to your competition by being too pushy. We’ve all experienced that type of salesperson who just won’t take no for an answer. It’s annoying, isn’t it? Don’t be that person! Instead, position yourself as a resource and provide your prospects with something of value. This establishes trust and fosters a long term relationship, which naturally leads to a greater conversion rate.

Nobody likes to feel like they’ve been tricked into something; yet dishonest salespeople try this tactic again and again. You know the kind – the “I just want to grab a cup of coffee and chat” kind. Then, as soon as you sit down, they whip out their best pitch and you end up feeling duped. You may land one or two sales this way, but you’ll turn off more people than you’ll win. Instead, focus on honesty and nurturing relationships. If you want to invite someone to coffee, do it. Just don’t drop a sales bomb on them while you’re there.

Ok, we did say that personalizing the sales experience was important, but there’s also such a thing as overdoing it. Knowing the names of your long-term customers’ children is one thing. Bringing up a tidbit like this during the initial meeting, on the other hand, is just…creepy. The rule of thumb is, don’t do anything to a prospect that would make you feel uncomfortable if the tables were turned.

While it’s true, people who are outgoing and funny often tend to end up in the sales field, these traits are not prerequisites. If you’re forcing yourself to be “on” all the time, chances are you’re coming across as insincere, which is never a good way to win someone over. Remember to always be yourself. If you’re a good property manager, focus on that instead of acting the way you think a salesperson should behave.

Take an honest look at yourself. If you’re doing any of the above things, chances are very good that you’re losing out on quality leads as a result. It’s probably time to change your approach. Focus on being honest, sincere and personal (but not too personal), and you’ll be amazed at how many more people will want to do business with you. 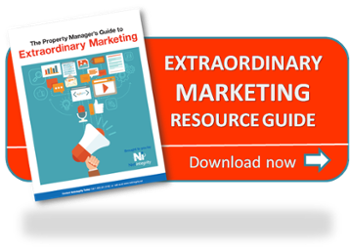 Get your free copy of The Property Manager's Guide to Extraordinary Marketing. It has all the inspiration and resources you need to make the right message heard by the right people.